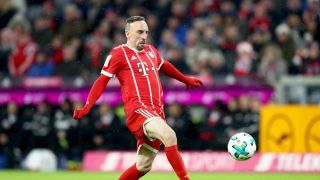 Franck Ribery's fitness will continue to be carefully managed as Bayern Munich close in on their mid-season break.

The 34-year-old winger made his longest appearance since returning from a lateral collateral knee ligament problem earlier this month, completing 76 minutes as Robert Lewandowski secured a 1-0 win over lowly Cologne for the Bundesliga leaders.

Stuttgart are up next this weekend before a DFB-Pokal clash against rivals Borussia Dortmund to close the year and, with old partner in crime Arjen Robben still sidelined by a calf problem, Ribery will not be placed under undue strain by boss Jupp Heynckes.

"Talking about Ribery, he was injured for a long time and now played 60 minutes in his first game and then 63," the veteran coach told DAZN.

"He could have played longer but I took him off because usually after the second or third game there is a high risk of re-injuring the ligament. I didn't want to risk that

"It is true that he worked well for the team and had good chances in attack. I am sure he will get better in the next two games and will be fully ready after the winter break."

Bayern hold a nine-point lead over Schalke at the top of the Bundesliga and Heynckes added: "We will then have more alternatives with him, Robben being back, Kingsley Coman and Thomas Muller.

"We will be able to rotate these players, which will be important looking ahead to the Champions League."

After a second-place finish behind Paris Saint-Germain in Group B, Bayern were drawn to face Besiktas in the last 16 and will host the Turkish Super Lig title holders in the home leg on February 13.