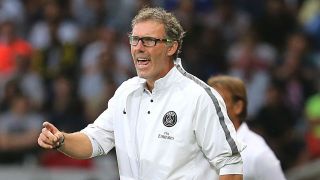 Paris Saint-Germain coach Laurent Blanc was not surprised to see Zlatan Ibrahimovic back among the goals as his side beat Guingamp 3-0 at the Parc des Princes, and called for patience as the striker's season warms up.

Ibrahimovic scored PSG's third to open his account for the season, much to the relief of the home crowd.

The Sweden striker also had a penalty saved as the champions dominated their opponents, with Javier Pastore scoring the opener and Angel Di Maria grabbing a second.

Blanc reflected on a much-improved performance from his side's 1-1 draw with Reims at the weekend, saying: "Zlatan was more in movement than during the Reims game.

"You have to be patient with him then you'll see that he will score goals. You don't have to be surprised.

"He is a great player and he wants to demonstrate it, to confirm it and even to stamp it for the sceptical few."

Blanc praised the link-up play between Ibrahimovic and Di Maria, who fed off each other all evening against Guingamp.

"He is getting along well with Di Maria on the pitch," said Blanc. "Great players always find a way to understand each other. It's also the case with [Edinson] Cavani. We have an attacking trio composed of very different players with different qualities."

Guingamp coach Jocelyn Gourvennec reflected positively on his side's performance, saying: "A wider margin of defeat would have been harsh.

"There are no regrets with this match. We had opportunities in the first half.

"We should not be ashamed of this defeat. They will be champions.

"There are five days left for us to prepare for a very big match against Monaco."