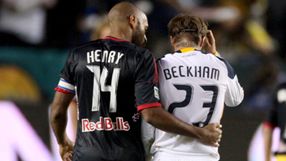 Defending champions L.A Galaxy, featuring former England midfielder David Beckham, take part in the single-game knockout 'play in' round of the competition, aiming for a spot in the Western Conference semi-finals.

The Galaxy only finished fourth in the Western Conference and so must defeat fifth-placed Vancouver Whitecaps, who became the first Canadian team to reach the MLS post-season after pipping national rivals Toronto and Montreal.

"When we've played them in the past they've shown it is difficult to break them down and win the game. There will be many obstacles, especially with it being a one-off play-off game. It's going to be difficult," he added.

Should the Galaxy get through they will face the top team in the Western Conference regular season - the San Jose Earthquakes, who possess the league's top scorer Chris Wondolowski whose 27 goals matched MLS's all-time record.

The other 'play in' features the Chicago Fire against the Houston Dynamo, winners in 2006 and 2007, with the victor in that tie facing Sporting Kansas City.

"We have guys who have been there and we believe in our team mentality," said Dynamo midfielder Brad Davis.

"The play-offs come down to everybody fighting for one another, stepping up that intensity a little bit and we know we are able to do that when our backs are against the wall," he added.

The New York Red Bulls, featuring former Arsenal, Barcelona and France striker Thierry Henry, have never won the MLS title and their bid to end that barren spell going back to 1996 begins with a two-legged Eastern Conference semi-final against D.C United.

Henry is no longer the pacey striker of his youth but, in a deeper, probing role has struck a great understanding with American forward Kenny Cooper who scored 18 goals in the regular season.

"It's amazing to feel so much confidence in the people around you when you play with someone like Thierry Henry, who is incredible and assisted on so many of my goals this year," said Cooper.

The other semi-final, which is already set, features Real Salt Lake, winners in 2009, against the league's best supported team, the Seattle Sounders.

The Sounders have reached the play-offs in all three of their previous seasons since coming into the league but have never won a series.

RSL have developed an attractive passing style of play under coach Jason Kreis and will start as favourites, especially if Seattle striker Eddie Johnson, the team's top scorer with 14 goals, fails to recover from a hamstring injury.

A huge crowd is expected for the second leg in Seattle. The Sounders have averaged 43,144 in the regular season, by far the largest in the league.