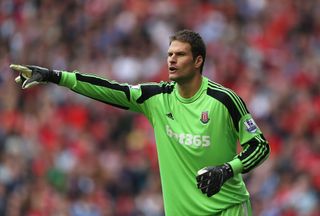 The Bosnia and Herzegovina international has not featured since sustaining a broken finger last month, but he returned to training this week.

Jack Butland has started Stoke's last three games in the absence of Begovic, but boss Mark Hughes revealed that his first-choice keeper could feature against Jose Mourinho's side.

Hughes said at Friday's press conference: "Asmir has been back involved with the group this week which has been a bonus for us, so we will see how he (is) and make a decision on who we feel we should go with.

"We will look at guys who have been out for a little while over the next 24 hours, and obviously Asmir being one of those who falls into that category."

Stoke have suffered back-to-back Premier League defeats and Hughes admitted he has one eye on their league clash with Sunderland next Wednesday.

However, the Welshman insists there is no danger he will not take the FA Cup seriously.

"I will go into Sunday's game with the intention of being strong, and seeing where that takes us," he added.

"We have got to be mindful about the big game on Wednesday, but that said there is sufficient time for players to recover in time for that match too.

"It's the FA Cup at the end of the day and we are all desperate to progress and remain in the competition for as long as possible."

Recent loan signing John Guidetti is suffering from illness ahead of the clash with Premier League high-fliers Chelsea, but Hughes hopes the striker will be in contention.

"John unfortunately has come in today a little bit under the weather to be honest so we will have to check him tomorrow," he continued.

"Obviously, we are hoping that he is okay for the game because it is a good opportunity for him to get a little bit of game time, but if he isn't available then we do have other options."

Stoke have already beaten Chelsea once this season courtesy of Oussama Assaidi's late winner in a 3-2 victory at the Britannia Stadium last month.