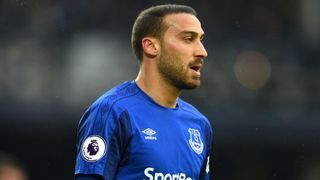 Missing out on Everton's 3-1 defeat of Crystal Palace did "not bother" £27million signing Cenk Tosun because he is focusing on getting fitter.

Tosun joined Everton in January after impressing over the previous year-and-a-half with Besiktas in Turkey.

Scoring goals had been identified as Everton's biggest problem in the first half of the season following the sale of Romelu Lukaku to Manchester United, with the club then shelling out for Turkey international Tosun, who netted eight in 12 league starts for Besiktas before leaving.

But by no means has he swiftly established himself in the starting XI at Goodison Park, starting just two Premier League games and failing to score.

Sam Allardyce kept Tosun on the bench for the entirety of Everton's 3-1 win against Palace, with Oumar Niasse starting - and scoring - in his absence, but Tosun is looking at the bigger picture and working hard.

"I am in a completely different league," Tosun is quoted as saying by Turkish-Football.com.

"I'm doing everything to settle in and bond with my new teammates.  I did not play in the last game, but it does not bother me.

"I am just focused on my game and training hard. I am going to be a lot fitter in a fortnight's time and then return to the starting XI."