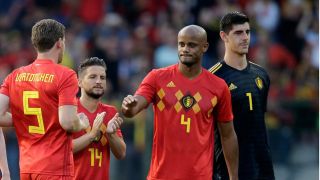 Vincent Kompany was replaced with an apparent injury as Belgium and Portugal continued their World Cup preparations with a low-key 0-0 draw in Brussels.

Jan Vertonghen, already Belgium's most-capped player, made his 100th appearance for the national team, the Tottenham centre-back lining up in Roberto Martinez's back line, but the coach will be concerned about Kompany after he was substituted early in the second half.

It was defences on top for the majority of Saturday's clash of the European heavyweights at the King Baudouin Stadium, goalkeepers Beto and Thibaut Courtois untested during a flat first half.

Vertonghen's strike produced a fine save from Beto in the 55th minute, while Martinez avoided further selection headaches after opposite number Courtois shook off an apparent wrist injury after being caught by Ricardo Quaresma.

Despite Belgium boasting talent including Kevin De Bruyne, Eden Hazard and Romelu Lukaku in their XI the hosts failed to find top gear against a stodgy Portugal side that toiled creatively without their talisman Cristiano Ronaldo, who is on holiday following the Champions League final.

Euro 2016 winners Portugal will welcome the Real Madrid superstar back before Russia 2018, but Belgium coach Martinez will face more questions about his tactics after a flat display from his hotly-tipped side.

Goncalo Guedes and De Bruyne sent early efforts off target as both sides took time to settle into any rhythm in Brussels.

Courtois made the game's first save in the 23rd minute, but the long-range strike from Joao Moutinho was likely sailing wide of the Chelsea goalkeeper's right-hand post.

Yannick Carrasco rippled the side-netting with a drive after beating a series of defenders with a dangerous dribble, before Courtois was called into more routine action at the other end, saving comfortably from Raphael Guerreiro.

Portugal were the more threatening side before the interval and when Gelson Martins teased an inswinging cross into the box in the 40th minute, Guedes should have hit the target.

Vertonghen almost marked his 100th appearance with a lovely strike, but when he collected a lay-off from Marouane Fellaini and fired at goal, Beto made a fine flying save high to his right.

Martinez had to replace Kompany with Dedryck Boyata in the 55th minute after the Manchester City captain appeared to pull a muscle in the process of making a tackle, potentially putting his World Cup place in doubt.

And there was an injury scare for Courtois mid-way through the second half, substitute Quaresma accidentally treading on the goalkeeper's wrist as he raced through on goal.

Thomas Meunier forced another decent Beto stop in the 64th minute as Belgium had the better of the second half, but they were unable to break the deadlock as the scoreline from the last meeting between these sides on Belgian soil in 2000 was repeated.

With the World Cup less than two weeks away, Fernando Santos will hope for a positive prognosis on Beto after the Portugal goalkeeper appeared to hurt his thigh late in the game.

Belgium have two more warm-up games scheduled, the first of which is against Egypt on Wednesday, while Portugal will head to Russia after their final fixture against Algeria on Thursday, but Martinez will be hoping for positive news on Kompany before naming his final 23-man squad.