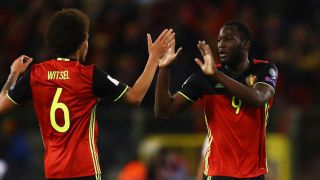 Romelu Lukaku's late goal rescued a 1-1 draw for Belgium after they were moments away from suffering their first defeat of their World Cup qualifying campaign against nine-man Greece.

Roberto Martinez's side went into the game with a 100 per cent record, but were outwitted in Brussels by Greece, who arrived with a smash-and-grab game plan that almost produced a famous victory.

Kostas Mitroglou scored in the opening moments of the second half before Greece, who had Panagiotis Tachtsidis sent off for a second bookable offence after 65 minutes, hung on until the 89th minute, when their hearts were broken.

Lukaku's superb volley allowed Martinez to breathe a sigh of relief and he came close to a last-gasp winner with a powerful header that was eventually hacked clear, but the game ended level and with tempers frayed as Georgios Tzavellas was also given his marching orders.

The result moves Greece up to second in Group H, while Belgium remain top, but Martinez will face intensified scrutiny after a disappointing performance and the first game of Belgium's campaign not to end in victory.

Belgium dictated the tempo from the outset and should have taken the lead after 12 minutes when Dries Mertens' cross from the right found Marouane Fellaini unmarked in the box, but the Manchester United midfielder headed well wide from 10 yards out.

The absence of Kevin De Bruyne and Eden Hazard did not prevent Belgium from playing some fluid attacking football, and Yannick Carrasco broke down the left before Lukaku and Radja Nainggolan linked up to feed Mertens, but Tzavellas slid in to prevent the Napoli forward from finishing the move.

Carrasco continued his probing runs down the flank and his low cross allowed Fellaini to try an audacious backheel shot after half an hour that drew a fine save from Stefanos Kapino, who tipped the ball over the crossbar.

While Greece failed to register a shot in the first half, they successfully thwarted their hosts and frustration was growing around the stadium by the time Nainggolan drilled an attempt wide from the edge of the box just before the interval.

Within 20 seconds of the restart, Belgium were behind. Toby Alderweireld's lofted clearance was headed forward again by Panagiotis Tachtsidis and Mitroglou latched onto the ball before applying a clinical finish with his left foot and sending the ball into the far corner of the net.

The goal instilled some urgency into Belgium's play and Lukaku teed up Axel Witsel for a well-struck shot that flew wide of the target before the visitors were reduced to 10 men.

Tachtsidis was shown a second yellow card for an innocuous challenge on Alderweireld and Belgium poured forward thereafter, with Mousa Dembele sent on to freshen up their attack.

Mertens was at the heart of Belgium's best play and he fired straight at Kapino from 10 yards out before Lukaku blazed the rebound over the crossbar, but it seemed certain an equaliser would arrive eventually.

And it did arrive when Mertens' cross was expertly chested down by Lukaku, who struck a volley on the turn that beat Kapino at his near post, his 28th goal of the season for club and country.

Kapino, though, did brilliantly to prevent the Everton striker from scoring the winner from point-blank range moments later with a brilliant double save.

Tzavellas was then sent off amid angry confrontations following his challenge on Alderweireld, but in the end Greece will be delighted to leave Brussels one point better off and one place higher in the Group H table.