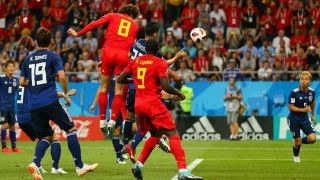 Nacer Chadli and Marouane Fellaini made World Cup history as Belgium came from two down to beat Japan and move into the quarter-finals.

Japan led 2-0 thanks to goals from Genki Haraguchi and Takashi Inui in a stunning seven-minute spell after half-time, the Group H runners-up seeking a first appearance in the last eight.

But a double substitution and a switch to more direct tactics paid dividends for Belgium as Jan Vertonghen's looping header gave Roberto Martinez's side a lifeline in the 69th minute.

Fellaini headed home a pinpoint Eden Hazard left-wing cross to level the scores and in the fourth minute of added time, Chadli completed one of the all-time great World Cup comebacks.

Kevin De Bruyne and Thomas Meunier combined to set up Chadli for a close-range finish that means Belgium will face Brazil in the quarter-finals on Friday.

And the impact made by Fellaini and Chadli means Belgium became the first team in the history of the World Cup's knockout rounds to have two substitutes score off the bench.

2 - Belgium are the first team in history to have two subs coming on and score a goal in a World Cup knockout game. Masterminded. July 2, 2018