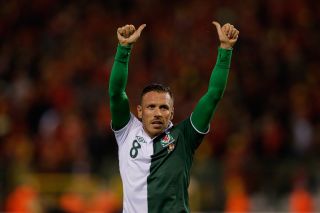 The Cardiff City striker brought an end to his 78-cap Wales career with an impressive 1-1 draw in Belgium - a positive end to a largely disappointing FIFA World Cup Qualifying campaign for Chris Coleman's men.

Bellamy had dropped several hints about the impending conclusion of his Wales career before officially confirming it earlier this month.

He has also hinted he could draw a close to his playing career at club level at the end of the current season.

"You do think: 'This is probably the last time I'm going to be in this position as a player,'" he told BBC Sport.

"To soak in your national anthem. I'm speechless about it, but it is really nice. It's something I do cherish.

"It did hit home a bit that I'm not going to be this side of it again.

"I've enjoyed every second of it. To reach 78 (caps) and the injuries I've had down the years. I'm delighted."

Bellamy, who made his international debut against Jamaica in 1998, believes he is leaving the Wales squad in more than capable hands.

"It's a good generation. A lot of them had potential but a lot have come to the fore and are fulfilling it."