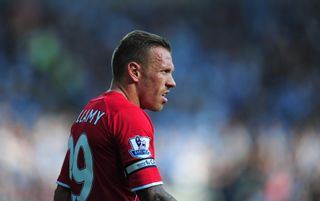 The former head of recruitment at the Cardiff City Stadium, who also worked with manager Malky Mackay at Watford, was suspended in the week and then officially replaced by 23-year-old Kazakh Alisher Apsalyamov on Friday.

Reports have suggested that Cardiff owner Vincent Tan could be trying to oust Mackay from the manager's dug-out, removing one of the Scot's most trusted members of staff in an attempt to unsettle him.

"Iain is a huge loss for us, a huge, huge loss because he is outstanding," Bellamy said.

"Any club with Iain Moody is a miles better club, without a shadow of a doubt."

The experienced attacker went on to hail Mackay as one fo the best managers in the country, praising the Scot's ability to unite the squad and bring them closer to the club's fans.

"As a manager Malky is the best young British manager out there and what he's done for this club in a short space of time is nothing short of remarkable," Bellamy added.

"We are such a tight-knit group now, the discipline he has brought into this club is remarkable.

"I'm just a player, I can only talk from a player's point of view and I can't try and dictate to anyone above me but the simple fact is I am very fortunate as a player to be working with the guy.

"He's certainly brought everyone together at Cardiff and we needed that.

"That's not being disrespectful to the managers who were here before him but he's taken it on to another level.

"He's united the city and being from Cardiff that makes me feel very proud."

After taking over at Cardiff in July 2012, Mackay led the Welsh club to the Championship title last term and they currently sit 14th in the Premier League with two wins from their opening seven top-flight fixtures.