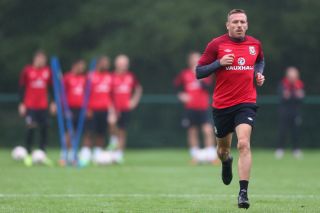 The 34-year-old Cardiff City forward has won 76 caps for his country and scored 19 goals since making his debut back in 1998.

Bellamy is set to play his final home game for Wales in a Group A clash with Macedonia at the Cardiff City Stadium on Friday night.

Provided he avoids a booking, he will then bow out on the international stage against Belgium next Tuesday.

Wales are bottom of Group A ahead of their final two qualifiers and Bellamy believes that time is right for him to step aside and let the next generation of players come through when his country attempt to qualify for the 2016 UEFA European Championship.

The former Liverpool, Celtic and Newcastle United man said: "Players come and go and my career has definitely come and gone.

"I have to do what's best for the national team and this group of players are the future. The next qualifiers, two-odd years, I'm not going to see it.

"They have to have a better opportunity of qualifying. I have to cut myself short."

Bellamy made his Wales debut against Jamaica in March 1998 and scored his first goal at international level in his next appearance in a 3-0 win over Malta.

He captained his country for the first time in October 2006 and was named as Wales skipper on a permanent basis the following year when Ryan Giggs ended his international career.

"I'm just grateful for every game I've been lucky enough to play for my country, and I really mean that," Bellamy added.

"It's an honour to play for your country at any level at any sport.

"[Playing] 70-odd times, it's been the best. Even the disappointments, even the lows, even the times I didn't want to play again because sometimes defeats can do that to you.

"Seventy-odd times having that honour like singing the anthem… it's still the best and Friday will be the best and hopefully I will get the chance to do it again on Tuesday. [It] will be hard to let go.

"My daughter will probably come out with me [before the Macedonia game] but it will probably hit me more after it... when you're watching the team."