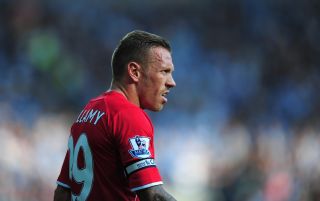 The 34-year-old Welshman continues to be a big part of Malky Mackay's plans at Cardiff, after returning permanently from Liverpool last year to make 28 starts for the side in their promotion-winning campaign.

And as they enjoy life in the top flight for the first time in over half a century, Bellamy continues to be top pick for his manager, having started all three league games so far.

However, following a difficult FIFA World Cup qualifying campaign for his country, the striker has confirmed that it may just be time to hang up his boots.

"Well my mood does change, I know I could change what I’m thinking," he said.

"But the way I'm feeling now, it could be my last season in football. I have so much to look forward to after football.

"I've been playing at a professional level for 17, 18 years now and there’s more to life.

"Don't get me wrong, I've cherished every moment of it.

"But life isn’t just about football. The adventure starts when you finish and I'm looking forward to that."