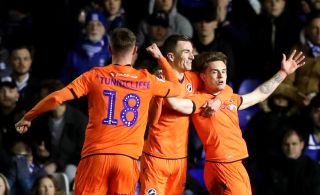 Ben Thompson’s double at Birmingham gave Millwall a vital win in their fight against relegation.

The midfielder struck twice in the first half to secure a 2-0 win as the game ended without any crowd trouble following Sunday’s shocking assault on Aston Villa’s Jack Grealish at St Andrew’s.

Press Association Sport understands stewards were given a strict reminder of their responsibilities ahead of the match.

Fan Paul Mitchell was sentenced to 14 weeks in prison after invading the pitch and punching Grealish in Villa’s 1-0 derby win. There were no such problems this time.

Millwall – who ended a run of four straight defeats – sit just a point above the Sky Bet Championship relegation zone after Rotherham’s late win at QPR.

Brighton boss Chris Hughton, a former Blues manager, watched on ahead of their FA Cup quarter final at Millwall on Saturday as the visitors cruised into a 2-0 lead.

First, Neil Harris’ side opened the scoring after 13 minutes when they broke after Birmingham failed to make the most of a free-kick.

With the hosts exposed Thompson swapped passes with Lee Gregory and fired in low from 16 yards.

Che Adams then forced David Martin into a smart near-post save as Blues looked for an instant response.

But they should have fallen further behind after 19 minutes when Ben Marshall lobbed over with just Lee Camp to beat follow Gary Gardner’s loose pass.

Yet the visitors did not have to wait long to double their lead as a second arrived after 32 minutes.

Again it was dubious defending from Birmingham as Thompson was given time and space to cut in from the right and roll beyond Camp from six yards.

A response never came from the hosts, although Connor Mahoney’s drive was disallowed for offside soon after the re-start.

And the Lions offered little in the second half but held on despite late Birmingham pressure.