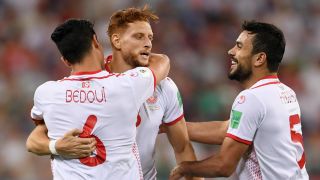 It was not enough to keep them in the tournament, defeats to England and Belgium having already sealed Tunisia's Group G fate.

Ben Youssef, though, will at least have a landmark goal to remember and here - courtesy of Opta - is the company he joins...

The first goal in World Cup history was scored by Lucien Laurent, for France against Mexico in the maiden tournament in Uruguay. Laurent finished well from the edge of the penalty area to write his name into the history books, with France going on to win the game 4-1. Although Laurent passed away in 2005 at the age of 97, he was able to attend the finals in 1998, when France claimed the trophy on home soil.

It took 48 years for 1,000 goals to be scored at World Cup finals, with Rob Rensenbrink the man who scored the landmark goal for Netherlands in a game against Scotland. Rensenbrink opened the scoring from the penalty spot, but the match will always be remembered for Archie Gemmill's sensational strike as Scotland came from behind to secure a famous 3-2 victory in Mendoza.

The United States will host the 2026 finals and the last time the World Cup was held in America, Claudio Caniggia struck the 1,500th goal in the history of the tournament. Caniggia struck twice for Argentina in a 2-1 defeat of Nigeria, hauling his side to victory from behind in Boston. Argentina went out in the round of 16, though, losing 3-2 to Romania.

Sweden will face England in the quarter-finals at Russia 2018 if both sides make it through their round of 16 fixtures - and when they met 12 years ago Marcus Allback scored the 2,000th goal of the World Cup. The Three Lions led thanks to a quite brilliant long-range lob from Joe Cole, but it was Allback who hit the landmark when he struck the leveller - a comparatively forgettable header from a corner.