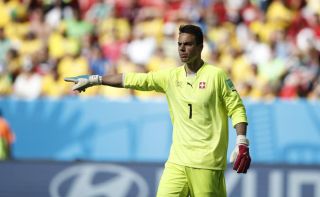 Benaglio, 30, had been Switzerland's number one keeper since Pascal Zuberbuehler retired in 2008 and started all four of the country's matches at the World Cup in Brazil.

But after 61 caps following his debut in 2006, Benaglio decided to call time on his international career as he turns his attention to the Bundesliga with Wolfsburg.

"First of all, I'm not getting any younger and want to focus more on my club career," Benaglio said in a statement released by the Swiss Football Association.

"I'm in good shape, but once you're over 30, you need just a little bit more time to recover than you used to.

"I also want to spend more time with my family."

While the decision was difficult, Benaglio believes Switzerland are well positioned to deal with his departure, with Yann Sommer (Borussia Monchengladbach), Roman Burki (Freiberg) and Marwin Hitz (Augsburg) all plying their trades in Germany's top flight.

"This hasn't been an easy decision for me. The Swiss team has developed in fine fashion, and we have a great group with an excellent atmosphere," he said.

"But that's also the reason that I don't feel that I'm abandoning the team. Switzerland has a rising generation of quality 'keepers, especially when you look at Swiss goalies in the Bundesliga."

"Diego has enough experience to know the responsibility he is taking for his decision," he said.

"For me, it's now a matter of looking forward. Fortunately, we have other quality alternatives for the position."