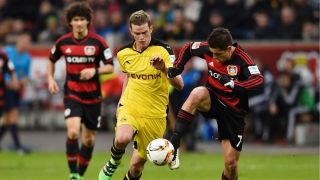 Borussia Dortmund midfielder Sven Bender has reiterated his hope that the club can tie down their key performers to new contracts, a week after he agreed fresh terms.

Bender extended his contract until 2021 last week but Dortmund are yet to secure the long-term futures of Henrikh Mkhitaryan, Mats Hummels, Ilkay Gundogan and Marcel Schmelzer.

The quartet all see their contracts expire next year, with Bender stating after signing his new deal that he "would be glad if some of my other team-mates would follow in the coming weeks".

And speaking to Kicker on Monday, he added: "We didn't really discuss [my statement] in the dressing room.

"I just wanted to say that we are a totally committed bunch of guys, and it's a whole lot of fun. I hope that it was food for thought for one or two players to not give it up.

"I don't want to pressure anyone, but I would personally be delighted if a few would opt for Borussia in the end."

Bender has been with Dortmund since 2009, winning two Bundesliga titles and the DFB-Pokal under former coach Jurgen Klopp.

Dortmund are on course for Pokal and Europa League success under Klopp's successor Thomas Tuchel but trail league leaders Bayern Munich by eight points ahead of the sides' meeting at Signal Iduna Park on Saturday.

"Changes just for the sake of it don't automatically make sense," added Bender, who filled in at centre-back during Sunday's 3-1 win over Hoffenheim.

"I appreciate what I have here. As long as I feel trust, I will stay here. The club just fits me. BVB is just like me - down-to-earth. And it stands for solid and clear work."