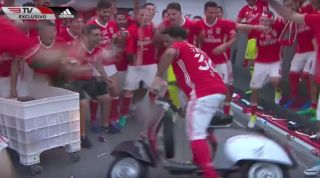 This time around, it seems that their players felt the need to step the dressing room celebrations up to the next level. Well, at least Eliseu thought so anyway.

Footage inside the Benfica dressing room after the match showed a crowd of players part for the 33-year-old wing-back and his own personalised moped. He duly brought his vehicle into the centre and, after some further encouragement from his team-mates, produced a series of donuts around the room. As you do.

The bar has been set, trophy winners.