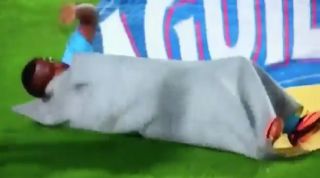 With Jaguares already 1-0 up at Santa Fe in a Colombian top-flight contest on Sunday night, Kevin Londoño gave his team a two-goal cushion in the 71st minute after picking up a simple squared pass for an easy tap-in.

But it wasn't the goal that would make headlines. The 23-year-old's celebration was novel, as he laid down on a sponsor's mat by the goal and rolled himself up in it.

It looked like he may have even had practice, as he required virtually no assistance in making sure he completed his sausage look.

Londoño was booked by the referee after he eventually unravelled himself and got up. Was it worth risking such punishment? Absolutely.