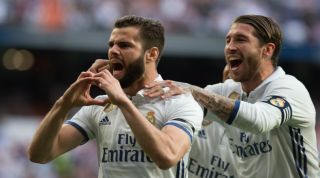 With los Blancos needing a win in order to ensure the La Liga title would remain in their hands entering the last two games of the season, Nacho was the surprise first goalscorer on the night.

After Mateo Kovacic was brought down on the edge of the Sevilla penalty box in the ninth minute, the visitors started to put a wall together in anticipation of a trademark Cristiano Ronaldo strike.

But they were caught off guard: within seconds of the set-piece being awarded by referee Alberto Undiano, Real Madrid's 27-year-old defender struck the ball into the bottom corner without a single Sevilla player being prepared for it. Somewhat surprisingly, Undiano allowed the goal to stand and Real Madrid were on their way to winning the match 4-1.

Zinedine Zidane's side are now just four points away from winning La Liga, and could secure three of those with a win at Celta Vigo in midweek. They face Malaga to end the season on Sunday.