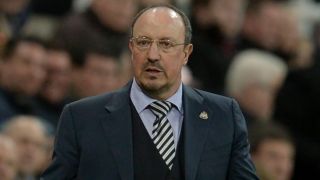 Benitez spent six years at Anfield and returns to his former club on Saturday, with his Newcastle side showing renewed fight in their battle against relegation.

They followed up last weekend's 3-0 win over Swansea City with a 1-1 draw at home to Manchester City on Tuesday that moves the Premier League's second-bottom side to within two points of safety.

Liverpool have Wednesday's Merseyside derby against Everton and a Europa League semi-final tie against Villarreal either side of the Newcastle match - something Benitez hopes can work to his side's advantage.

"We have to try and win every game - it doesn't matter where," he said.

"My connection with Liverpool is obvious, but hopefully they will do really well in the Europa League and we can get three points in the Premier League.

"We are doing well at the moment - hopefully in a game away against a very good team like Liverpool, we can see the same reaction [as against City]. We have belief that we can fight and beat anyone.

"The players are playing with passion and commitment and the fans can see that. So hopefully we can do the same for the next four games.

"We cannot look at the table too much. We just have to concentrate on the next game."