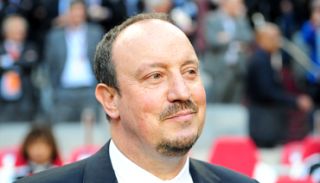 "Rafa Benitez is the new manager of Napoli," club president Aurelio De Laurentiis said on his Twitter feed on Monday.

The Spaniard replaces Walter Mazzarri who quit after the team finished second behind Juventus in Serie A this season to qualify for the Champions League.

Mazzarri was in charge for just under four years, building a strong attacking side which twice qualified for the Champions League and won the Italian Cup in 2012.

He said on resigning that he felt he had taken Napoli as far as he could.

Benitez was in charge of Inter for the first half of the 2010-11 season after replacing treble-winning Jose Mourinho.

With the team lying a modest sixth in December of that season, the Spaniard's job was under threat, but he appeared to earn a reprieve when he led them to victory in the Club World Cup in Japan.

Benitez then angered Inter owner Massimo Moratti by demanding reinforcements and was sacked before Christmas.

He then remained out of coaching for nearly two years until Chelsea hired him to replace 2012 Champions League-winning Roberto Di Matteo in an interim capacity.

Benitez ended a seven-month spell at the London club earlier this month by winning the Europa League and finishing third in the Premier League, thereby qualifying for the Champions League.

He won the Champions League and FA Cup with Liverpool and La Liga twice with Spanish club Valencia where he also won the old UEFA Cup.

The 53-year-old may have to rebuild Napoli following media speculation that forward Edinson Cavani, Serie A's top scorer this season with 29 goals, is set to join one of Europe's wealthier clubs.

On Wednesday, De Laurentiis said he wanted a manager who admired the frenzied southern Italian city but also played down the importance of the man in charge of team affairs.

"For me, the coach has only a 15 percent influence over the team but the rapport he creates with the players is fundamental," he said.

"The main characteristic of the new coach will be a profound love for Naples otherwise there will not be an agreement. Benitez is a polyglot and maybe he could learn the Neapolitan dialect as well."

Although Napoli enjoy fanatical support, they have been successful only in patches.

Their most impressive team was the Diego Maradona-inspired side in the late 1980s who won the club's only two Serie A titles as well as the UEFA Cup.