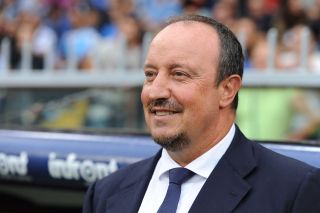 Benitez has lost just two games in all competitions since taking over from Walter Mazzarri in May.

Napoli sit second in Serie A ahead of Wednesday's trip to Fiorentina, where they will look to stay in touch with unbeaten leaders Roma.

And former Liverpool and Chelsea boss Benitez is pleased with the progress his side have made so far this season.

"The feedback up to now has been 100 per cent positive: we won seven matches, drew one, and lost one match (in Serie A)," he said.

"Also in the Champions League the evaluation is positive.

"But this feedback doesn't involve only the performance on the pitch, but also the team and the club in general: the club is growing and we'll see where we can get to. Of course everything seems to be positive."

Napoli's clash with fifth-placed Fiorentina sees them face a side unbeaten in their last four league matches.

But Benitez does not believe the game will have a significant bearing on the title race.

"(The) match is as important as all other championship matches, but it is also important because both teams are close to the top of the table," he added.

"Fiorentina are a skilled team and they represent a challenge for us. In any case, every match will be important until the end of the championship if Juventus, Inter Milan, Roma and Fiorentina keep on winning matches."