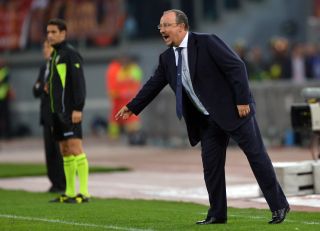 A brace from Miralem Pjanic saw Roma to the equal-best start to a Serie A campaign as they claimed an eighth consecutive win.

But Benitez took positives from the defeat, and believes Napoli controlled large parts of the contest.

"I think we had a difficult opening 20 minutes, then for the rest of the first half did very well, in my view better than Roma," Benitez told Sky Sport Italia.

"After the break we controlled everything, but with the penalty it was over. If Roma defend with 11 men behind the ball, it's not easy to find space. We got through anyway and hit the woodwork, so were unlucky."

Benitez was unhappy with the penalty decision, with replays suggesting Cannavaro and Marco Borriello were holding each other in the area.

"The penalty changed everything. Everyone told me it was not a penalty," Benitez said.

"You can see 50 of those tussles in every game. I am not here to say whether it was a penalty or not, as that will be down to the referees to judge."

Napoli striker Gonzalo Higuain started on the bench because of a thigh injury and Benitez denied reports the Argentine had asked not to be in the starting 11.

"I made the decision. We watch the players in every training session and I decided it was better to start with (Goran) Pandev," Benitez said.

"If we find space for the rapid counter-attack, then we make it difficult for anyone.

"We had a few chances and moved the ball around well, but against a strong side like Roma to concede a goal on the stroke of half-time and another on a penalty it becomes difficult for everyone.

"I look at the performance and in terms of character, Napoli did very well this evening.

"I said beforehand this game would not decide the title, but clearly with the way we played tonight I'd say it was a positive evening. We played well and this bodes well for the future."