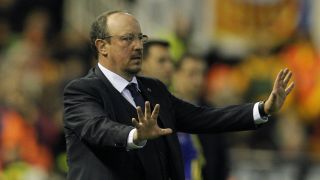 Real Madrid coach Rafael Benitez described repeated questions over his future as "misguided" and praised his players for their display in Sunday's 2-2 draw with Valencia.

Benitez was denied a much-needed win at his former club thanks to Paco Alcacer's late header, having led early on through Karim Benzema.

The Frenchman's opener was cancelled out by Dani Parejo prior to half-time before Mateo Kovacic was dismissed for a lunge on Andres Gomes.

Gareth Bale looked to have ensured victory for Benitez but Alcacer gained a point seven minutes from time as Benitez's men failed to punish Barcelona's draw with Espanyol on Saturday.

When asked again about his future, Benitez told reporters: "You are entitled to ask the question but I think it is misguided.

"It is a waste to only see the result. The effort made by the team deserves more praise than anything else.

"I cannot control the speculation. What I do is I get the team to work as it has today. They have made a great effort and unfortunately have not taken all three points.

"We played a good game. In the first half for 35 minutes we had control, the second half was difficult but we worked well.

"When we were down to ten we had to make more of an effort and the players did that. We had chances of winning and losing, my regret is that after the goal we couldn't stop their second."

Goalscorer Benzema was withdrawn midway through the second half for Lucas Vazquez shortly before Kovacic was dismissed in a change that will have raised eyebrows.

But Benitez explained: "[Benzema] had worked hard. He had a problem the other day and we wanted to have more control in midfield.

"Unfortunately we then went down to 10 and it was a matter of staying strong. The team made a great effort with ten."