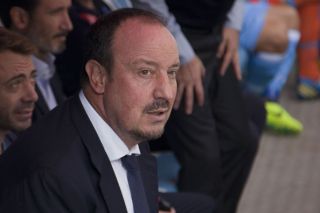 Benitez's second-placed Napoli sit four points above an in-form Fiorentina in fifth but the former Liverpool boss acknowledged their trip to Florence on Wednesday will be dangerous given the home side's attacking flair - headlined by Giuseppe Rossi and Mario Gomez.

While Napoli also pack an attacking punch, with the likes of Gonzalo Higuain, Jose Callejon and Goran Pandev up front, Benitez said picking the right time to attack would be crucial at the Stadio Artemio Franchi.

"In order to find the right balance, a team has to make a good performance both in the offensive and defensive phases," the Spaniard said on Tuesday.

"This is what we're trying to do week after week in order to improve our balance.

"Both our team and Fiorentina usually try to dominate, therefore we'll see which team will control the game but, in any case, what's important for me is to find the right balance.

Benitez has been shortlisted for the FIFA Coach of the Year award, having taken the reins at the Naples club after guiding Chelsea to third place in the Premier League in his interim stint at Stamford Bridge from November last year until May.

The 53-year-old said he had received nothing but positive reinforcement during the start of his stint in southern Italy.

"The feedback up to now has been 100 per cent positive: we won seven matches, drew one, and lost one match," Benitez said of their Serie A record.

"Also in the Champions League the evaluation is positive.

"But this feedback doesn't involve only the performance on the pitch but also the team and the club in general: the club is growing and we'll see where we can get to.

"Of course everything seems to be positive."

Benitez said a focus on 'determination' to get results in Italy was wide-ranging, making it even more difficult to achieve the ultimate success in the top flight.

"When I worked in the UK, we usually talked about passion and behaviour, whereas here you talk about determination," Benitez said.

"Determination is the word you hear in every press conference before and after the match.

"This is important and we have to prove our determination and close the matches.

"If we manage to do it, it would be easier for the manager to manage the squad after each match.

"We have to improve from this point of view but I'm satisfied because the feedback up to now is very positive.

"In any case, there is always room for improvement."