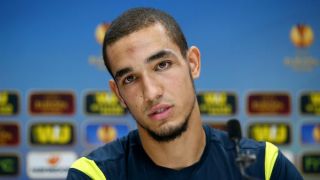 West Ham appeared to be on the way to victory over their London rivals at White Hart Lane after goals from Cheikhou Kouyate and Diafra Sakho gave them a 2-0 lead.

But Danny Rose pulled one back in the 81st minute before Harry Kane scored on the rebound from his saved penalty, awarded after he had been felled by Alex Song, in the 96th minute.

Afterwards Allardyce indicated that Tottenham go down quickly regardless of the level of contact to give the referee a decision to make, but midfielder Bentaleb has dismissed those remarks.

"He [Allardyce] can say whatever he wants," Bentaleb said.

"We scored a penalty in the last minute. Maybe it's because of this, I can understand if he's a little bit angry. But it's not true. Of course it was a penalty – there's no doubt about that.

"If he wants to argue, we could also say Noble could have been sent off. But this is football. Sometimes the referee makes decisions and you just have to shut your mouth and not complain.

"The positive thing we can take out of this game is that we believed until the end and once again we scored in the last minute and managed to get that point."