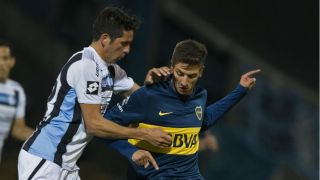 Bentancur was reported to be close to a €10million move to the Santiago Bernabeu, with Madrid thought to be stepping up their interest ahead of an impending two-window ban on registering new players.

But, last week, Boca president Daniel Angelici revealed there had been no official contact from the Liga side, a statement supported by the midfielder's comments.

However, the 18-year-old was elated with the reported interest from the Spanish capital.

"I found out [about the interest]  through my agent and the press and obviously greatly honoured and proud that Real Madrid are interested in me," Bentancur told Marca.

"However, to tell the truth, I've got to make it clear that there has been no formal offer from Spain. Nothing has been finalised.

"All I know is that I owe Boca 100 per cent. I've got two years left on my contract here and until I'm told otherwise, my goal is to fight for this club."

Asked whether he was a midfielder more in the mould of Fernando Gago or Juan Roman Riquelme, Bentancur said he is more comparable to the former Madrid man: "I'm not a playmaker. I am more a controller of the game.

"I have been known to play with one or two touches. I like releasing [the ball] fast and finding the gaps in the game.

"I consider myself more of a Gago [than a Riquelme], although both are benchmarks."