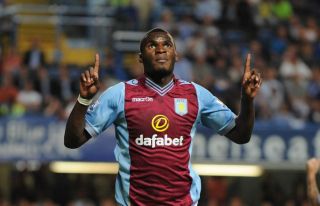 Benteke hit the headlines after scoring 23 goals in all competitions in his first season at Villa, and although he was injured during last term, he still managed to score 11 times.

The return of Benteke would be a significant boost for Villa and Lambert said he is progressing well, but that the club would remain cautious.

"Next week we will see how he is for the Man City game. I'm not saying he'll start, or anything, but he's certainly getting close.

"He's had another good week [of training] under his belt. People forget he's been out five months, he's only trained three weeks. He's not done a pre-season.

"He's taken a couple [of] little kicks in training and has come through them.

"The injury is totally fine. I'm not worried about that.

"It's just his lack of practice. You've got to watch he doesn't break down after too much too soon.

"Everybody is happy to see him come back. It's been a long road for him, missed the World Cup, [so] him coming back has been great.

"It will give everyone a lift when he comes back, supporters included."

Villa sit third in the Premier League table after winning three of their first five matches.