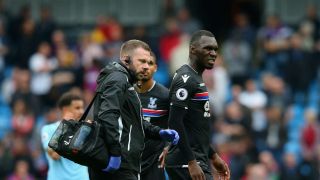 Crystal Palace's dismal start to the season has received another punishing blow after Christian Benteke suffered suspected ligament damage to his knee during the 5-0 defeat at Manchester City.

Palace became the first-ever English club to lose their first six league games of the season without scoring after Saturday's heavy loss at the Etihad Stadium.

And the prospects of Roy Hodgson's men finding the net next time out at Manchester United have been hit by the news Belgium striker Benteke is set for a spell on the sidelines.

"He's not well - we think it's a form of ligament damage and I don't know quite how bad that ligament damage is," Hodgson said after a brace from Raheem Sterling and late goals by Sergio Aguero and substitute Fabian Delph added to Leroy Sane's superb first-half opener for the Premier League leaders.

"He's going to have a scan on Sunday. It will mean he won't be playing in the next game, which we could do without at this moment in time."

RH: Benteke's not well. We think it's a form of ligament damage, but not sure how bad. He'll have a scan tomorrow. Won't play vs United. September 23, 2017

Palace acquitted themselves well before Sane found the 44th-minute breakthrough and should have led through Ruben Loftus-Cheek, but Hodgson took little comfort from their efforts during the opening stages as more daunting fixtures lie in wait.

"It's ridiculous to sit and talk about positives when you've been beaten 5-0," he said.

"Admittedly we're playing against a real top-quality team who, when they get in the lead, are capable of showing the full register of their technical ability and ability to create and take goal chances.

"We wanted, at least, to repeat what we'd done in the first half where we'd matched them or kept them at bay for 44 minutes and created some good moments of our own on the counterattack.

"We've got to accept that we've been given a headache and during the course of the week we've got to try and find the aspirins that will ease the headache and keep working on the things we are trying to work on.

"Unfortunately, there is a risk that Man United and Chelsea would be as capable as Man City have been of punishing us when we don't get things right."