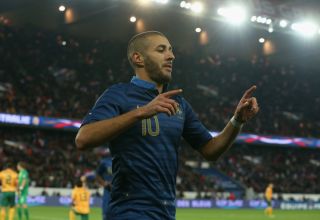 The Real Madrid striker found the net for his country for the first time since June 2012 - a barren run that lasted 1,222 minutes - as France prepared for their final FIFA World Cup qualifier against Finland with an excellent display.

Franck Ribery opened the scoring for Didier Deschamps' men at the Parc des Princes, with Benzema rounding things off after a double from Olivier Giroud and goals from Yohan Cabaye and Mathieu Debuchy had put the game well beyond Australia's reach.

And Benzema was quick to thank his team-mates and the fans for their support after finally ending his goalless streak, which he admitted had hampered him mentally.

"I have managed to score the goal that had weighed a little on my mind," Benzema said.

"I thank all the team who have been behind me. It was nice to be supported by the public.

"There is another game on Tuesday (against Finland) and we will need the win."

France sit three points adrift of Spain heading into their last Group I clash and their hopes of automatic qualification for the World Cup look slim.

Deschamps, though, was quick to voice his delight after witnessing a superb team performance.

"This is the value of an international match," Deschamps told TF1.

"I know that our opponent was not at our level, but it was a game that we made easy with the intentions and effectiveness we displayed.

"To score six goals is never easy. This is a victory of all the team. It is very positive."