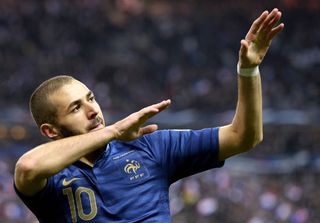 The Real Madrid player endured a torrid 16-month spell during which he failed to hit the back of the net for Didier Deschamps' side.

Benzema has also come under criticism from sections of his club side's supporters, after notching just twice in eight La Liga appearances.

But he has gone some way to silencing the doubters by scoring in the 6-0 friendly victory over Australia and following that up with the third goal in France's 3-0 FIFA World Cup qualifying triumph over Finland on Tuesday.

And Benzema never questioned his ability to turn his fortunes around.

"I've always had confidence in myself," he said "I had difficult times because I haven't scored in a while.

"But I don't leave anything, I have never given up and I will continue to work."

France's slim hopes of securing automatic qualification to the World Cup in Brazil next year were ended when Spain defeated Georgia 2-0.

It means the 1998 World Cup winners have to settle for a play-off spot against one of Croatia, Portugal, Greece or Sweden

But Benzema is confident of progression regardless of who awaits France.

"We don't fear the play-offs. We look forward to being there," he added.

"We know we have to play two games if we want to qualify for the World Cup in Brazil.

"We know it will be difficult. We will fight. Everyone knows it.

"I don't want to name a team that we would rather play.

"If they are here, it's because they are a team who play well. Still, everyone thinks Portugal is the best team. We will wait for the draw and stay focused."