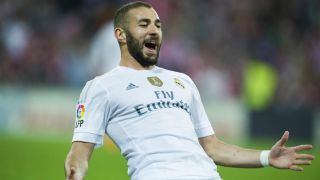 Benzema has battled injury and off-field problems throughout the 2015-16 season, but the Frenchman has still managed to score six La Liga goals this term.

The 27-year-old, who is embroiled in a sex-tape blackmail case involving international team-mate Mathieu Valbuena, had not played for Madrid since October 4 due to a thigh problem until Saturday's 4-0 loss at home to Barcelona.

Ancelotti was asked about Benzema in an interview with RMC Sport and the former Madrid boss said: "For me, he's a great number nine, a great all-rounder really.

"He can score, he plays a collective game and helps the team to play better. I can't say much more, he's one of the best strikers in the world, the ideal striker for Real Madrid.

"With players like [Cristiano] Ronaldo and [Gareth] Bale, Karim is the perfect finisher. If France want to have any chance of winning Euro 2016, they'll need Karim in their side."