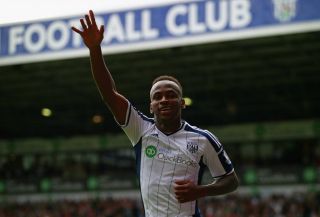 Berahino bagged a brace as West Brom opened their Premier League campaign with a 2-2 draw at home to Sunderland on Saturday.

The 21-year-old striker's goal-scoring performance saw him make the headlines for all the right reasons, having been involved in two notable incidents in 2013-14.

After bursting on the scene with a hat-trick on debut against Newport County in the Capital One Cup at The Hawthorns, Berahino was embroiled in a heated dressing room bust-up with team-mate James Morrison following the club's 3-3 draw against Cardiff City in March.

It came only weeks after Berahino was caught inhaling "hippy crack" - a legal high - in his car, however, the England U21 international insists he is on the right track.

"I have learned a lot," said Berahino.

"It's made me a better player and a better person off the field.

"I am more aware of stuff that goes on in and around football so it's made me much better and stronger.

"In the dressing room? That's the past, everyone has moved on. We drew a line under it and we're all looking forward to this season."