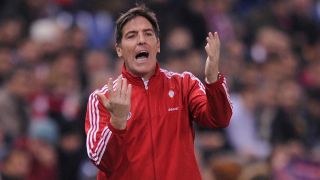 After a 0-0 draw in the first leg, the Galician side put on a confident display at Vicente Calderon, where two goals from Pedro Pablo Hernandez and another from John Guidetti meant Celta became the first team to win at Atletico since Benfica in September.

Berizzo saw Celta let a 1-0 lead slip in the first half, but praised the character displayed by his players to clinch victory.

"The conviction of the players was key," he said. "We were very serious, solid, and we learned to manage difficult moments.

"At 1-1 we showed our collective strength and played our usual football."

He added: "When you beat a great team it is easy to exaggerate, but this is my biggest win. I feel proud to come to a stadium like this and beat a huge team like Atletico."

Atletico coach Diego Simeone insisted his side gave everything to try and progress in the Copa del Rey, denying suggestions that they were holding back ahead of their Liga clash with title rivals Barcelona this weekend.

"We set out to compete in the best way," he said. "We were looking to take the game but it didn't go well. We conceded three goals, and that is not typical of us.

"When you try to play attacking football, you can lose. This is football."

Simeone refused to agree with suggestions that his side had endured a repeat of their failure to reach the Copa del Rey semi-finals last season, adding: "Failure? You can call it whatever you want."