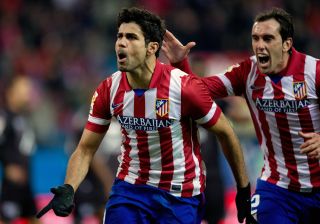 Diego Simeone's side have defied expectations and sit second in La Liga - level on points with leaders Barcelona - following a fine first half of the season.

Atletico have prospered despite selling star striker Radamel Falcao - who scored 70 goals in 91 appearances during his time at Estadio Vicente Calderon - to Ligue 1 side Monaco in the previous transfer window.

Berta concedes Atletico are always likely to be a selling club, but does not believe that key players - including top scorer Diego Costa - will leave the capital club in the near future.

"Atletico is a club which, due to its nature, has to sell every year," Berta told Tele Radio Stereo.

"We believe that we can keep our players for at least another year.

"Diego Simeone is passing his characteristics onto the players.

"The squad identifies with him and his charisma. He has the ability to get every player to take on a big role in the team."

Berta also praised the development of Costa, who has 23 goals this season, following several loan spells in the early stages of his time with Atletico.

"He (Costa) has managed to develop over the years with the patience to wait for the opportunity," Berta added.

"He has very important qualities, much determination and competitiveness. He is a special player."

Atletico have won trophies in each of the last four seasons, and Berta is confident the club have a set-up to sustain that success.

"The president and the owner of the club are competent people," he explained.

"Then there is a group which is doing a superb job: five cups and seven finals (since 2009).

"The project goes beyond individual abilities. They graft hard in every game as if it were their last."