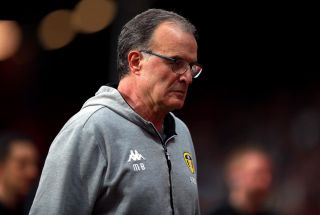 Players from both sides were involved in a mass melee when Leeds refused to kick the ball out of play as Villa’s Jonathan Kodjia lay injured.

Leeds midfielder Mateusz Klich went on to score and Villa’s players and bench reacted furiously before Bielsa ordered his players to let the visitors walk in an uncontested goal in the 1-1 draw.

Bamford fell to the floor in the melee and Villa defender Anwar El Ghazi was sent off for an alleged elbow, but television replays clearly showed the Leeds player had not been struck.

The FA have rescinded El Ghazi’s red card, but Bielsa said he was confused by their decision not to punish Aston Villa midfielder Conor Hourihane for appearing to punch Klich in the chest.

“It’s a fact that Patrick Bamford simulated so there is no point talking about (that),” an impassioned Bielsa told a press conference before Sunday’s game at Ipswich.

“After the decision is taken against Patrick Bamford all the same acts have to be judged with the same severity, but to make differences – it’s a very important risk for those who take justice.”

Bielsa explained in great detail – and for over half an hour – his interpretation of the FA’s decision not to punish Hourihane.

The Argentinian added: “The conclusion you have to draw is that when someone gives a punch you can’t analyse the strength of the punch – you know it’s a punch, you don’t know how strong, you have to measure it, and the only one who can measure it is the one who receives it.

Bielsa said Hourihane escaped punishment because Klich did not go down when punched and suggested the FA’s decision would encourage players to simulate in a similar situation.

“It means any punch you receive, even if it just touches you, go to the ground and simulate that it’s a very strong punch because the only way to get justice is by doing that,” Bielsa said.

“That’s why there’s a contradiction in the decision taken by the commission (the FA) because at the same time they sanction people who simulate, by the decision they have taken they invite people to simulate.”

Bielsa said he was not judging the FA’s decision, but merely interpreting it.

“Remember this, I am not asking for the commission to analyse any rival, I would never do that,” he added.

“I only say that this act was judged in this way and me as a head coach, I have to interpret the decisions taken by the commission because I am responsible for the behaviour of the players in my team.”

Bamford will miss Leeds’ final game of the regular season at Portman Road and the first leg of their play-off.

Bielsa confirmed Kemar Roofe had recovered from a hip problem and was in contention, but forward Tyler Roberts would be assessed due to an ankle injury.