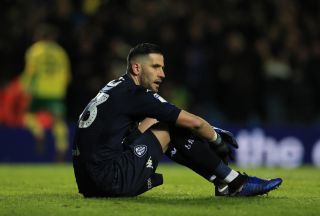 Leeds head coach Marcelo Bielsa has resigned himself to being without first-choice goalkeeper Kiko Casilla but praised stand-in Illan Meslier for his assured performance in the 4-0 win over Hull at the KCOM Stadium.

Casilla was banned for eight games and fined £60,000 by the FA’s disciplinary commission for racially abusing Charlton’s Jonathan Leko during a game in September.

Bielsa first found out about the ban when it was announced on the eve of the match against Hull but stand-in Meslier was rarely threatened as Leeds kept the pressure on Sky Bet Championship leaders West Brom.

Bielsa said of Meslier: “He was calm and confident and he took risks. He gave us the feeling that he’s confident.”

Of the ban for Casilla, the Leeds coach added: “The authorities expressed themselves, also Kiko, also the club.

“We must accept the rules of the competition and accept those decisions.

Bielsa said the club would support Casilla, adding: “From us he will feel all the love he feels from us.”

Goals from Luke Ayling and Pablo Hernandez plus substitute Tyler Roberts’ late brace made it four wins in a row for Leeds.

Hull’s poor run of form continued as they went 10 Championship games without a win to leave them embroiled in the battle to avoid relegation.

Bielsa revealed a switch to three at the back for the second half allowed his players to express themselves more as an attacking force.

He said: “In the first half we didn’t defend well. We started the game with one line of four defenders and after we changed with a line of three defenders. In the second half the second goal helped us.”

Leeds grabbed an early lead when Ayling’s shot from distance took a deflection off Callum Elder but they did not come into their own until after the break.

Hernandez, who struck the bar shortly after Ayling’s opener, made it 2-0 two minutes into the second half with a shot from the corner of the six-yard box.

Hull keeper George Long twice denied Helder Costa and Jack Harrison fired against the post before Roberts scored twice in the space of three minutes, firing home from inside the area before heading home Leeds’ fourth.

Hull rarely threatened, though substitute Norbert Balogh turned and fired against the post with a quarter of the game to go.

Hull boss Grant McCann admitted his team had been second best, particularly in the second half.

McCann said: “The early goal has knocked us a bit but we hit back. There was very little in the first half.

“The goal just after half-time knocked the confidence. Second half that early goal has thrown it all up in the air.

“They are a top team and there is no doubt they will probably go on to get promoted this year.”

Despite the defeat McCann was defiant about where his team go from here.

He said: “This result is not going to define our season, we’ve got some big games coming up.”