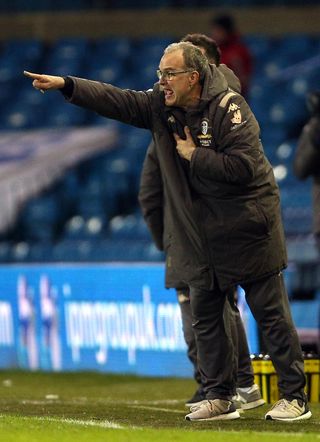 Marcelo Bielsa admits his Leeds players deserve all the credit for their stunning 3-2 comeback win over Millwall.

The Whites were 2-0 down at half-time and looked shell-shocked – but they came out roaring after the interval and scored three goals inside 18 minutes to go back to the top of the Championship.

Many will give Bielsa plenty of praise but the Argentine instead lauded his players for their turnaround.

“It’s not what I said which provoked the change,” said Bielsa.

“Maybe the match looked like it was strange, but it’s a copy of all our matches. A lot of chances to make three goals, the opponent goals were similar to what we normally concede.

“At the end of the match it was uncomfortable and not calm, but in both halves we had a lot of chances.

“We played very well in attack. It is similar to most of our matches. In the second half it was easier when we were playing in more space.”

The visitors raced into the lead with barely four minutes on the clock. A corner was whipped in and Shaun Hutchinson rose unmarked to plant a header past home stopper Kiko Casilla.

Bartosz Bialkowski in the Millwall goal was keeping Leeds at bay and that proved vital as Millwall notched a second midway through the half.

The visitors were awarded a penalty after Jon Dadi Bodvarsson was clumsily felled in the box by Gjanni Alioski. Jed Wallace duly stepped up and smashed the spot-kick home to double the Lions’ advantage.

Leeds looked well off the boil but produced a riveting second-half showing to turn the game on its head. Bialkowski made a superb point-blank save to keep out Jack Harrison’s effort from a corner but Patrick Bamford was there to easily tap in from a yard out to halve the deficit.

Helder Costa struck the crossbar whilst Mateusz Klich somehow blazed over from just a few yards but Leeds held on to secure a potentially huge three points.

“Ten days without a game has probably benefitted Leeds which you saw with the running and energy.

“We knew this was a tough place to come. To get in at half-time 2-0 up, we didn’t perform well enough after that.

“We conceded a poor goal just after half-time and then they get a deflection for the second and their third, we stand off the crosser.

“We created some opportunities in the game but we didn’t pass the ball enough today.”

There was a flashpoint in the second half when coins appeared to be thrown by Leeds supporters as Wallace took a Millwall corner.

When quizzed on it, Bielsa said: “It’s a question where the answer is there, because I can never agree with this (coin-throwing).”