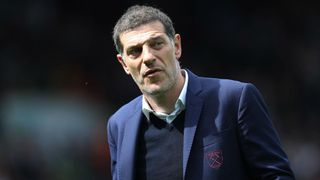 West Ham boss Slaven Bilic and Burnley counterpart Sean Dyche were singing from the same hymn sheet in terms of player recruitment after the Hammers beat the Clarets 2-1 in their final Premier League game of the season.

Burnley led after 23 minutes at Turf Moor through Sam Vokes' effort, but Sofiane Feghouli quickly restored parity before Andre Ayew nodded in a second-half winner for the visitors.

The result means West Ham finish 11th in a hit-and-miss campaign that has seen boss Bilic regularly fend off questions over his future.

But Bilic pointed to West Ham's injury troubles this term and is keen to add more quality to his squad for next season.

"We thought we were going to do better [this season], we had so many obstacles, so many injuries, so many surgeries, eight, which is not usual," he told BBC Sport.

"The summer will be busy for every club. This game showed we have a quantity of players and a squad.

"We were without eight players and still we had a good team out. We need a few players to improve our first team.

"Make no mistake our targets are also the targets for eight to 10 clubs in the Premier League."

So, at the end of it all, we've finished th in the .Thank you for your unrivaled support throughout the season.May 21, 2017

Burnley boss Dyche was disappointed to surrender a lead as his side finished 16th and he also spoke of the need to improve his squad, while praising his team for surviving their first season back in the top flight.

"The disappointment of [the defeat] is tempered by the fact that we are still in the Premier League and that was always the aim," he said.

"It is important we keep recruiting where we can and keep learning.

"It is an obvious challenge to keep what we have got and we will wait to see if we can do that. We have got better year on year, that is not just the players it is the staff.

"Recruitment is a big thing, to keep moving forward and we will be able to do that."

For West Ham the end of the campaign draws to a close a difficult first season at London Stadium, with the Hammers winning just seven home league matches since leaving Upton Park.

"The move to the stadium, which is the best thing the club has ever done long-term, it took us a while to settle," Bilic added.

"You need time. It is very hard to get that Upton Park feeling but it is going to get better and better.

"We showed character [to beat Burnley]. We finished 11th and are one point from being eighth. It is not a very bad season."