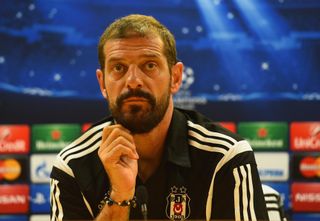 Arsenal limped into the group stages of the Europe's premier club competition with a 1-0 aggregate play-off success over Bilic's team.

Alexis Sanchez's first goal since joining from Barcelona in Wednesday's second leg put Arsenal through in a contest that also saw defender Mathieu Debuchy sent off.

The victory means that Arsene Wenger's men will compete in the competition proper of the Champions League for the 17th straight season.

However, despite their consistency in qualifying for the tournament, Bilic does not view the 2006 finalists as challengers for this season's trophy.

"I would love it [Arsenal to reach next year's final in Berlin] because it would make us look like contenders," Bilic said.

"If they improve [they have a chance], and of course they are going to improve, the league just started and they have got a few injuries.

"They are missing the strikers although Sanchez was good tonight. But to win it? With Bayern [Munich] and Real Madrid? Football is strange but it would be difficult."

Arsenal will discover their group-stage opponents at Thursday's draw in Monaco.