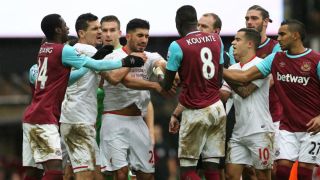 West Ham manager Slaven Bilic has warned Liverpool his West Ham United side are hungry for the win and progression in the FA Cup ahead of Saturday's showdown.

Bilic said Jurgen Klopp almost made a near fatal error in the cup when he fielded Christian Benteke and 10 relative unknowns for Liverpool's third round tie against League Two outfit Exeter City - which finished 2-2 before the Premier League side won 3-0 in the replay - and the Croatian manager said he would not be entertaining a similar approach.

"If I didn’t believe that we could go through then I would put kids in the game," he said.

"OK, we have a really big game against Aston Villa on Tuesday but I really believe that we have a chance to knock them out.

"We want it, we are hungry, we have a good team, we are in good form, we have been quite consistent for the whole season and of course we are very optimistic."

Bilic has already overseen a West Ham win over Liverpool, as his side put Klopp's side to the sword on January 2 with a strong 2-0 win and while he expects his German counterpart to put out a stronger side than he did in the third round, he expects some changes from the side that needed extra-time to beat Stoke City in the League Cup semi-final second leg.

"I am not expecting many of the guys who played 120 minutes on Tuesday to play on Saturday,” he added.

"But we are preparing to face their best side. They still have a big squad and players like Nathaniel Clyne, he will probably be back, they have Benteke, they have Joe Allen and Jordan Ibe.

"So I don’t think it is going to be the team that played at Exeter - it won’t be Benteke plus kids."