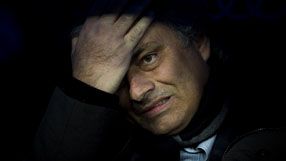 Mourinho's Real side have stuttered in the first half of the season and the combative Portuguese has been at loggerheads with the Spanish press, who have been quick to seize on any sign of disharmony off the pitch.

Coverage of the Spanish champions was dominated this week by a report in Marca sports daily that club captains Iker Casillas and Sergio Ramos had threatened to leave along with several team mates unless Mourinho was dismissed.

Real President Florentino Perez said the newspaper was lying and trying to destabilise the club but Marca has stuck by the story, the latest in a string of reports suggesting all is not well between the coach and some leading players.

Performances have been erratic and Real have slipped 15 points behind La Liga leaders Barcelona, whom they host on Wednesday in the first leg of their King's Cup semi-final.

Elimination followed by defeat by Manchester United in the looming Champions League last 16 tie would almost certainly end Real's hopes of silverware this season and increase the pressure on Perez to replace Mourinho, lured at great expense from Inter Milan in 2010.

While Mourinho, who has barely spoken to reporters since the turn of the year, again opted not to give the customary news conference the day before a Real game, a television interview with him was broadcast on Saturday by Italy's RAI.

He said he did not know if he would add to the Champions League titles he won with Porto in 2004 and Inter Milan in 2010 while Real coach but a third would certainly come.

"What I cannot say is whether I will achieve it this season, but in the 15 or 20 years left in my coaching career I will do it," he said.

His first 50 years had passed very quickly, he added, before opening the door to a possible return to Inter.

"In any case, 50 is a nice number which allows you to assess all that has happened," he said.

"There are a lot of things still to be done and one may be returning to Inter, why not?"

Raphael Varane, Real's 19-year-old French centre-back, was sent out instead of Mourinho to answer reporters' questions ahead of Sunday's home La Liga game against Getafe and he said Mourinho had the players' full support.

"We are all behind the coach who is the best in the world," Varane said.

"The media are being tough on him but he is doing a good job and all this is not necessary."

Varane added that the squad had given Mourinho a signed photograph taken during the wild celebrations after they sealed the La Liga title by beating Athletic Bilbao last season.

Real have a number of injury problems ahead of the Getafe match and Wednesday's Cup game, with Casillas sidelined for up to three months with a broken hand and Varane's fellow centre-back Pepe still recovering from ankle surgery.

"Losing Iker could destabilise the team but I don't think it will change all that much," Varane said.