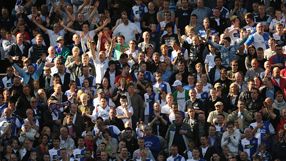 Forty-four years later, the Premier League club has Indian owners and a mission to tap into the huge Asian market, while the north-western English town itself is home to a thriving Asian community that makes up almost a quarter of its population.

Blackburn, who struggle to pull in fans in an area saturated by top clubs such as Manchester United and Manchester City, have long sought to attract fans from different backgrounds, installing a multi-faith prayer room at their Ewood Park ground in 2008.

Fans welcomed their arrival last week to end three years of uncertainty while the club was up for sale but are cautious while they wait to hear more details of their investment plans.

"Show us your money and we'll count our chickens," bus driver Khan, who has supported Rovers since moving to Blackburn from Pakistan as child in the mid-1960s, urged the owners.

Venky's, which makes products such as chicken nuggets, sealed a 54-million-pound deal to become the first Indian owners of a Premier League club but, apart from saying Rovers need a striker, have not told manager Sam Allardyce how much money he can spend.

Much of the owners' talk has been about improving the Blackburn Rovers brand but some fans have questioned whether they really have the club's interests at heart after saying they wanted to rename Ewood Park after Venky's or another sponsor.

"Blackburn Rovers is a very traditional club with a rich history and any tampering for 'quick' business reasons is on a par with tampering with the family heirloom," Nazir Musa, who writes a column in the Asian Image newspaper, told Reuters.

"It's not the done thing and naming the ground...will not be seen well by the fans at all. Blackburn folk are traditional, working-class, down-to-earth people set in their ways when it comes to their football club.

"If Venky's were to catapult us too fast and too soon they may find such get-rich schemes will fall flat as fast as they came.

"Rovers is a crystal heirloom which deserves to be handled with care, consideration and understanding. The fans would rather the club stable and mid-table than a one-season wonder."

Blackburn have, after all, already won the Premier League to achieve the seemingly impossible for a club from a small town.

Their 1995 title came after tens of millions of pounds of investment from Jack Walker, the steel tycoon with a big passion for his home town and football club who, many fans feel, set an example that no new owners will ever live up to.

Walker left a legacy of a redeveloped stadium and top-class training facilities as well as a trust to own the club when he died 10 years ago.