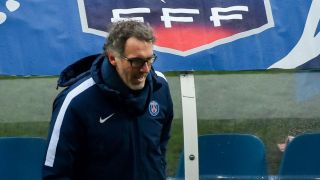 Laurent Blanc was delighted to see Paris Saint-Germain book their place in the last 32 of the Coupe de France despite being short of their best in Sunday's 1-0 win over Wasquehal.

Zlatan Ibrahimovic's goal shortly after the hour took the defending champions through, though the visitors looked laboured against their fourth-tier opponents.

PSG spent the mid-season break at a training camp in Doha, beating Inter in a friendly on Wednesday, and Blanc felt his players struggled to readjust to competitive action.

"Getting back into competition is always the most difficult and more so with the difficult weather conditions," he said.

"We would have liked to have been better and made things safe more quickly and be more serene, but we have not been able to this afternoon.

"We worked hard last week and we still had this work in our legs. The main thing was to get through this round, we did."

Blanc handed run-outs to a host of fringe players on PSG's trip to the Stadium Nord Lille Metropole, including second-choice goalkeeper Salvatore Sirigu.

Sirigu, linked with a move away from the French champions this month, brushed off questions over his future and revealed initial nerves over only his third appearance of the season.

Asked if he had played his last game for the club, the Italian said: "I do not know, ask the head coach or sport director. Me, I don't know.

"I haven't got the chance to train very often. I was filling a bit unready physically speaking and not ready for an entire game. I was trying to have my mind in the right place in order to perform well. Otherwise I could have done badly.

"We did what we needed to. The conditions were not great. They played well, we could see that.

"We always need to be scared because if you're not afraid, you do not realise that nothing is done yet. You can be surprised, but we managed it well.

"Before the game I knew it would be complicated. I thought about several things like the weather and playing again and we were facing a team that was getting ready for that game for a long time.