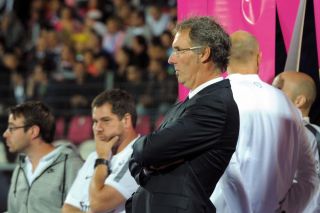 PSG have made a stuttering start to their title defence, with a win sandwiched in between two draws leaving the French champions four points adrift of leaders Bordeaux in 12th position.

Opponents Saint-Etienne are two points ahead of PSG, having made an unbeaten start to the season.

Both teams are renowned for their attacking philosophies and Blanc said he is expecting an exciting match at Parc de Princes with the likes of Ligue 1 top goalscorer Mevlut Erdinc and PSG striker Edinson Cavani on display.

"For it to be a great game, there needs to be two teams that want to put on a show, and play their own brand of football," Blanc told reporters.

"Two teams that are attacking - this is the case with us and it is also the case with Saint-Etienne. I do know Christophe Galtier, their head coach, very well. I don't think that he would like to play a defensively-minded game.

"But to have a great game, you need great players on the pitch and a good atmosphere. I think that all the ingredients are here for our match with Saint-Etienne to be a memorable one."

Blanc was also quizzed about the club's chances in the UEFA Champions League this season after being drawn alongside Barcelona, Ajax and APOEL in Group F.

PSG have made back-to-back quarter-final appearances in the competition and Blanc believes the club can go further this time around following the arrivals of Brazil international David Luiz and Serge Aurier during the off-season.

"Yes we can do better than last year in the Champions League, with the same team," said the 48-year-old.

"Don't forget that we have two new players during this transfer window. It's not nothing.

"Last year we demonstrated that we were close to achieving our goal, but we were missing something.

"I think with another year of experience we can reach the objective. Then we have to do it on the pitch.

"It is easy to say yes we want to reach the semi-final, the final and win the competition but we have to prove our motivation on the pitch."