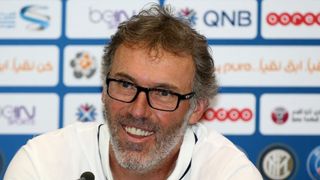 Laurent Blanc has hinted he is on the verge of signing a new Paris Saint-Germain contract and suggested it will be officially announced next week.

Blanc took over at the Parc des Princes ahead of the 2013-14 season following the departure of Carlo Ancelotti to Real Madrid and has overseen a period of domestic dominance in that time, most notably collecting an unprecedented clean sweep in French football last term.

The former France international stated back in December that talks had started on a new deal and it appears as though the 50-year-old is set to put pen to paper.

"You will know more [about a renewal] soon. Probably next week," he said ahead of PSG's trip to Saint-Etienne.

Blanc also defended misfiring striker Edinson Cavani, who is without a goal in any competition since December 16.

Last month, Blanc confirmed discussions had been held with the Uruguay striker over elements of his behaviour after rumours he was unsettled in the French capital.

But Blanc insists Cavani's attitude is fine and everyone is working hard to help him hit the target.

"I have no problem with speaking about Edi. He is in trouble on the pitch, he has some opportunities to score but not enough," he added.

"To me, for us it's important to help him. We will do it but there is a lot of competition. The competition has improved, that's obvious.

"He must be aware of that. In terms of team spirit, there is nothing wrong with Edi on the field. He must manage to score for confidence.

"His behaviour is better, he understood certain things, we have to see if it is confirmed in the future."