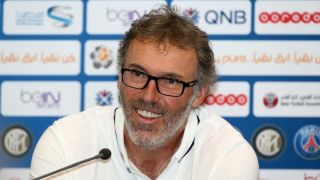 Paris Saint-Germain picked up where they left off in Ligue 1 following the mid-season break by beating Bastia 2-0 on Friday to leave coach Laurent Blanc praising his players' professionalism.

Thiago Silva and Maxwell both found the net for the reigning champions and runaway leaders at the Parc de Princes on Friday, a result that leaves PSG a staggering 22 points clear at the top and unbeaten in the league in 29 games.

"There were plenty of positives for us from the game, especially the way we played out wide," said Blanc.

"We played with a lot of determination in the first half of the season and won a lot of matches.

"But when you have a break, you let go a bit and this is normal.

"As a team, we have high hopes for February, March, April and May, but the work starts again now, in January."

Angel di Maria provided the assist for both PSG's goals, but Blanc denied suggestions that the league leaders are too reliant on the in-form playmaker.

"Is Di Maria essential?" he said.

"No-one is indispensable at Paris Saint-Germain.

"We can dispense with everyone, even the coach.

"I am fortunate to have a squad of quality and quantity and when it is full, I have the choice of a king."