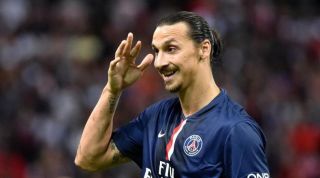 The Ligue 1 champions claimed their first league win of the new campaign thanks to goals from Lucas Moura and Edinson Cavani at the Parc des Princes on Saturday.

However, Ibrahimovic, PSG's top scorer for the last two seasons, lasted only 16 minutes before he was substituted with what Blanc described as "a strange injury."

"Initially, I thought he had taken a knock," Blanc said. "But no, it is his rotation where he gets injured.

"He felt a sharp pain on his right side. It is a strange injury.

"I'm not a doctor and I do not know if it's serious, but knowing Ibra, the pain had to be quite strong for him not to finish the game."

Ibrahimovic was not the only PSG player to suffer an injury, with midfielder Thiago Motta reportedly suffering a broken nose after appearing to be headbutted by Bastia striker Brandao in the tunnel after the game.

But, while Blanc will be far from happy with injuries to two of his key players, having already lost Thiago Silva to a hamstring problem, he was pleased with this side's defensive improvement following their disappointing season-opening 2-2 draw at Reims.

"This match confirms what I thought of Reims, who were very good at the technical level," Blanc, who handed a Ligue 1 debut to big-money signing David Luiz, added.

"But my team was not more ready today [Saturday]. The difference is that today we were very serious defensively and some attacks from Bastia have been mastered by Paris.

"This is the big difference between the two games."