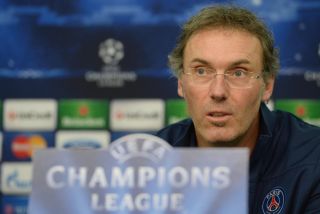 Blanc's men are five points clear atop Ligue 1 and go into their UEFA Champions League last-16 tie against the Bundesliga's second-placed side as favourites.

The 48-year-old coach said his team's lack of height was a slight concern but believes there are other ways for PSG to threaten.

"Their team is very athletic, a bit like all the German teams, with impressive players physically, so I think we're inferior to them on the aerial balls," Blanc said.

"However, they concede many goals from free kicks and corners, it proves that they use their size advantage better offensively than defensively, we'll have to remember that for tomorrow's game.

"We won't be able to fight on that part tomorrow, because the Parisian players won't grow 10 centimetres overnight.

"We'll have to use different methods to win and that's fine because our game is not based on a physical approach."

PSG midfielder Marco Verratti played down the favourites' tag handed to his team, saying the competition was too close to call.

Leverkusen come into the clash at the BayArena on the back of consecutive losses.

"When you get at this Champions League stage, both teams can go through. In these two games there are no favourites," Verratti said.

"We have to find a way to go through at all costs because nobody wants to lose. It's a competition as important for us as for our opponents and for a player is impossible not to give 100 per cent in it.

"It's going to be a tough game, we have a 50 per cent chance to qualify so we will have to earn it."