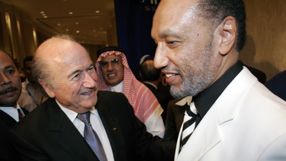 Both men spent part of the day at the same luxury hotel near the Arc de Triumph where members of all 53 European associations are gathering for Tuesday's UEFA Congress.

Also present was American journalist Grant Wahl, who hopes to stand as a protest candidate.

FIFA's 208 member associations have a vote apiece in the presidential election which will be held in Zurich on June 1 and with 53 members, more than other confederation, UEFA is one of the key regions.

Blatter, who has held the post for 13 years, declined to talk to reporters and delegates would not comment on where their preferences lay.

Bin Hammam, president of the Asian Football Confederation (AFC) and formerly a close personal friend of Blatter, said that football was stagnating under the Swiss's leadership.

"I am someone who has been contributing to football through my presidency of the Asian confederation, my love for football and my membership of the FIFA executive committee and I don't see anything is moving, anything is changing.

Leoz, who like Blatter and Bin Hammam is a guest of UEFA, told Reuters that CONMEBOL, whose 10 members are expected to vote as a block, had not decided on their candidate.

Meanwhile, Wahl was attempting to find one association to provide written backing for his vote before the April 1 registration deadline.

The American said he been in contact with more than 150 associations.